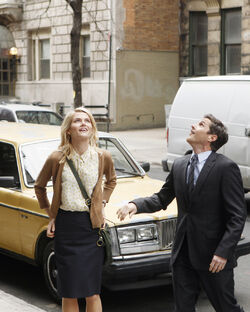 HOLY MOLY, PEOPLE!! If you watched the premiere of 666 Park Avenue last night then you know some really weird stuff went down!! Jane and Henry became the resident managers of The Drake, Gavin Doran did some really creepy stuff, and there was a bunch of scary supernatural things going on (uhh people getting sucked into walls, WHAT?!)!

For those of you who missed the episode, here are the key points that you need to know happened:

So if you missed the premiere, be sure to watch the pilot now! If you did catch it, what did you think? Share your thoughts with us in the comments below!

And here is the promo for next week's episode!

Retrieved from "https://666parkavenue.fandom.com/wiki/User_blog:Gcheung28/%22Pilot%22_Recap?oldid=4277"
Community content is available under CC-BY-SA unless otherwise noted.